About 20 km north of Alicante lies the city of Jijona or Xixona in valencian. If you ever visit the Costa Blanca in summer you might not even know about this special city.
Jijona and its about 7500 habitants, are famous all over Spain for its turron. This specialty made of sugar, honey, almonds and eggs is the most typical sweet eaten during christmas. So i took my camera and visited the city now during December, with a good “christmas feeling” in mind.

Coming from Alicante just take the national road ctra national No. 340 at San Juan. If you come from Benidorm direction, just exit the autopista AP-7 at the San Juan exit and you will already see the signs to Jijona or Xixona. Its about 15 minutes from the coast to the city.

Xixona – The World Capital of the Turron 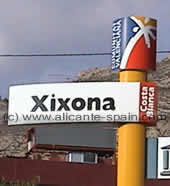 At Jijona there are many nice places to visit, as with most cities around the Costa Blanca, Jijona is a very old town with lovely little streets. On top of the hill next to it, you will find the ruin of the old city castle, with an impressive overview on the landscape. Drive up the road crossing the city,because the view straight over to the Costa Blanca is really breathtaking.

A bit outside, actually at the outskirts of Jijona you will see the turron museum. The museo del turron is located and maintained in the same factory which also makes the famous “EL LOBO” and “1880” turron brands. You can not miss it, indications to it are very good.

The museum offers a guided tour – (in various languages) – which not only show you the very detailed museum, but also let you see the real factory from a high above balcony area inside the plant. I was fortunate, because as I visited on 15. December, I was told that the factory is usually already closed. It only operates from mid June until mid December, but today they had to fulfill a “last minute order” and so I could see most machines running. Very impressive. 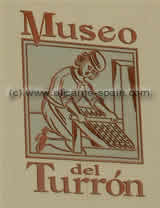 The museum gives you a wonderful overview on the different kinds of sweets they offer. From the two types of turron (the Alicante turron to the Jijona turron), to marzipan and other varieties.

The centuries long tradition of turron making in Jijona can really be felt inside the museum. A wonderfully detailed display of traditional and modern production methods, up until the packaging of the turron over the years to a very nice highlight and old turron delivery Rolls Royce truck.

At the end you get a chance to buy some of the different varieties in the enclosed shop. Even sugar free turron’s are available.

To sum it up, if you visit Alicante or the Costa Blanca area during christmas time, just like the nativity scene museum in Alicante, it is the perfect place to experience “the other” side of this beautiful country.

If you are here during summer time, it could also be a good idea to just get a break from the normal “beach and sun” life.