Villajoyosa Spain, with its about 20000 citizens lies just in the south of Benidorm, about 35 km north of Alicante.
With its lovely colored houses in the town center for most people Villajoyosa is the ideal counterpart to the sometimes crowded Benidorm. Not that well known to the hundreds of thousands of tourists coming into the Costa Blanca, Villajoyosa maintains its quite atmosphere beautifully.

You can start to smell the distinctive aroma of chocolate. The fame came to this humble town when it started to import from Ecuador and Venezuela this delicious plant in the 18th century. Nowadays, you can taste all kinds of varieties in the shops called Valor which produce and commercialize chocolate all over Spain. 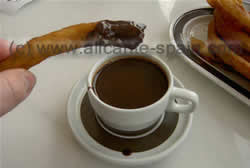 The Valor brand is very well known all over Europe. If you visit these Valor chocolate houses which are located at many cities around the Costa Blanca, make sure you get the local specialty :Chocolate with Churros! This sweet bakery is the ideal companion for a cup of hot chocolate.

The old part of this town is called the Arsenal and is situated on the shore. It is well wroth taking a stroll around the narrow streets with lively colored houses built on the flank or side of the river bank. Although many may think this to be dangerous, the reason behind this was so that the fishermen could see the sea from their homes. And for those who wish to try luck and have not had the opportunity to bet and gamble at a real casino, visit the Royal Palm Casino there.

The festivities called ‘Moors and Christians’ is lived to the maxi there. Usually at last week of July, there are parades with impressive costumes and accompanying music. There is also a real live re-enactment of the landing of the Moorish Army on the beaches at dawn with rustic weapons being used until, when the night falls, and the Arab leader and his army are thrown into the sea, being defeated. If you want to stay awake this night  then ‘do as the Romans do’ and try the famous drink called ‘nardo’ made from coffee and absinthe. 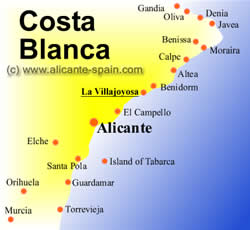 A variety of beaches, above all the beach of paraiso are very well known for windsurfing and water sports. La Villa like locals often call Villajoyosa, is also home to one of the best hotels along the Costa Blanca.

The Montiboli is one of the view five star villayosa hotels located on top of a cliff, with a breath taking view on the bay. With the typical hot Villajoyosa weather in summer, the city is perfect for a relaxing holiday under the sun. Even if you just happen to be a day time visitor, just come and see La Villajoyosa for yourself.