Even though Guadalest is a small village anchored in a small valley with the same, it is an extremely busy tourist attraction; so much as to be declared a Historic-Artistic monument in 1974.
Guadalest is first known for its ‘castle’, which is literally hanging on he cliff where it is found. There are also numerous museums, one even more interesting than the other mainly because they are the typical museums of art or history but about curiosities in life.

If you are having a visit to Denia, Javea, Altea, Benidorm or Alicante, to mention a few, then it is a fun day excursion to head inland from the National highway N-332, connecting onto the 3318 and then to the 3313 where Guadalest is located.

Or if you are coming by bus, you will be left in the lower part of the village the same as if you come by car, and you will have to walk up the hill, through the main arch way and then into the two main neighborhoods.

The Cliff Hanging Castle of Guadalest in Spain

Guadalest is of Islamic origin and at the time of its construction was considered a very valuable fortification. It was conquered y Jaime I and given to Vidal de Sarria whose family owned it up until 1335 and then later to Prince Pedro of Aragon.

The now almost non-existing Castle of Saint Joseph, which can be seen in one of the rockiest points of the cliff, played an important part in the structural defense of the old city. It was originally constructed in the XII century, was reformed in the XV and in XVI centuries, was affected by an earthquake in 1644 and left to what it is nowadays.

There are two distinctive neighborhoods

The Castle – The street which leads to this area is called De La Pena and is extremely pretty. The most outstanding characteristics are the white-washed houses, the amount of flower pots that decorate each house, the variety of craft shops with its leather objects. The street ends with a long staircase where there is a door carved out in the rock where you can go into an older part for around 3 euros. At the end of this street is the Town Hall where there are dungeons dating back to the XII also carved into the rock.

This is the highest and oldest part of the village where you can still see the local church of the Virgin, a bell tower built into the rock and the Castle of Saint Joseph mentioned before.

The Arrabal – on the side of the cliff where the almost two hundred inhabitants have decided to make newer living quarters, leaving the “ castle” for the tourists.

Relive the Past in Guadalest Museums

The museums that I found absolutely authentic and different are – 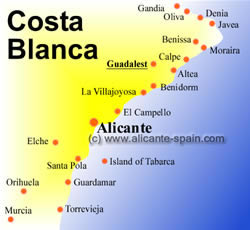 For a comfy stay, you can look at the Molinet del Governador, an old flour mill that has been converted into five independent, fully equipped rural houses. Real nice! And to warm your tummy, the Trestellador. An old farm house that has been redone with impressive views of the sea and the valley of Guadalest.