The City of Elche in Spain – World Capital of Palm Trees

It is easy to arrive at the city of Elche on the highway N-340 if we have flown into the Alicante Airport or if coming from Santa Pola on the highway C-3317.

And you will know immediately that you are coming close because all the roads leading to Elche are lined with palm trees and there are a lot of signs proudly announcing that this city was named part of the World Heritage in 2001 thanks to its art and tradition. 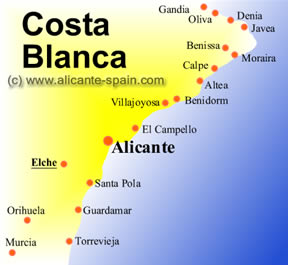 Ever since Iberian times, Elche was an important centre of civilization as we can clearly see with the impressive statue of the Dama de Elche ( The Elche Lady ) which was discovered in 1897 and is now found in the National Archaeological Museum in Madrid.

It is now the third most important city in the Valencian Community thanks to its population and has a prosperous shoe manufacturing business, but the sweets and clothing business are not too far behind.

The Scene is Set in Elche

As is mentioned before, Elche is recognized world-wide thanks to a religious reinactment of the life of the Virgin Mary ( called the Mystery of Elche ) in the Basilica of Saint Mary; something not usually allowed in sacred places.This church was built over an old mosque according to the design of Saint Nicolas church in Alicante and is an excellent example of 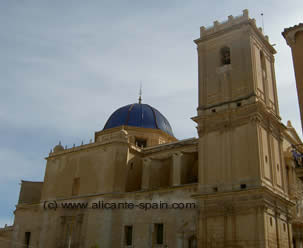 Valencian Baroque from the 18th century. The Mystery of Elche is celebrated in two acts; the first on the 14th of August and the second on the 15th of August in this great basilica. It relates her death, assumption into heaven and her coronation as the Virgin Mary.

Thanks to the devotion of the towns people and the papal permission from Pope Urbano VIII in 1632, this religious play has lasted until nowadays. The music for this play comes from different times like Medieval, Renaissance and Baroque melodies. But this is not all, the stage is not only on land but also uses aerial equipment which guarantees huge emotions.

With young “white” voices, a messenger angel descends from the heavens coming out of a pomegranate fruit and later a group of angels help Mary in her assumption into heaven to be crowned by the heavenly Father. With this there is a ‘golden rainstorm’ which gives you goose bumps just thinking about how it might have been back then. You can book for your tickets at the end of July at La Casa del Festa with the phone number 965-456-112 or through internet. Believe me, it is well worth it!

La Calahorra is a fascinating fortress from the 7th century and is found within the walled part of the city. In the 15th century an annex was built on but was used for Masonic acts and Egyptian rituals. Here, other than decorations that pertain to the Egyptian way of life, you will find different objects used in the meetings, ceramic pieces and a small mosaic from the 1st c. Going through a small doorway you are connected onto the catacombs and through another doorway into a room where Isabel La Catolica stayed.

Branch out from Elche

Torrevieja is just a stone’s throw from Elche, just 50 kilometres south of Alicante on the highway N-332. There you can enjoy its blue ribbon beaches and an interesting museum which explains the importance of the salt industry in this area. Or if you wish, just 50 kilometres north of Alicante taking the N-332 on the Costa Blanca is the bustling tourist city of Benidorm. This is one of the most complete holiday areas I know because it has a long stretch of beaches, lots of hotels, all kinds of eating joints, themes parks of every kind and easy to get from the Alicante airport.

If you put these places together with Elche, you are ready for an action packed holiday stay.