Murcia Spain with its about 300 000 inhabitants lies about 75 km south of Alicante about 30 km west of Torrevieja.
The city of Murcia can be reached via the national road E15 from Alicante or using the C415 from the Madrid direction. You can also use the bus or train, but do not look for a Murcia airport, you might not find one.
The mild climate with very little precipitation year round and the diversified ecological landscape draws you into an incredible state of well-being. 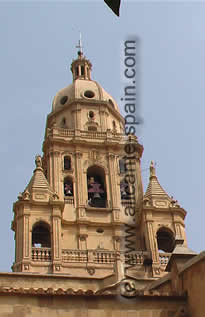 Its coast, with over 200 beaches, shares two different bodies of water: the Mediterranean and the Menor Sea, which has an outstretched piece of land called La Manga. Murcia is the capital of the province and got its own University.

The Mediterranean bathed region of Murcia, is not only known for its beautiful beaches, but also for a great number of natural beauties still to be discovered. It is precisely its natural charms and contrasts that makes Murcia outstanding from other regions. 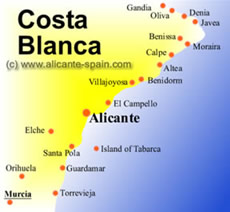 Natural open spaces that look like the most desolate deserts share common ground with lush fertile green lands like the valley of Segura and the valley of Guadaletin: modern residential neighborhoods reaching out to connect with small medieval towns.

What’s to Sunshine in Murcia

Embedded in between parts of the mountains of the Sierra de Orihuela and the Cresta de Gallo lies Murcia, the city which is due to the large and sophisticated watering system, very famous for vegetables. La Manga has become one of the most important resort areas of what is called the ‘Costa Calida’ or the Warm Coast together with Torrevieja on the Costa Blanca.

The Murcia region was first populated by the ancient Iberian tribes which started intense commercial relationships with the Phoenicians and Greeks, founding commercial factories on the coastal area. It is maybe thanks to this that its history has always been connected to seafaring activities and agriculture. It was a Carthaginian colony and then taken over by the Moors who graced this part of Spain with an advanced system of irrigation which has made Murcia’s crops famous world wide, even nowadays.

This aspect has helped its gastronomy become very popular with a rich balanced Mediterranean diet in elaborating stews, salads, baked meat and rice dishes. But you must not forget that its closeness to the sea also gives it its rich culinary seafood delicacies. And what would be a Spanish meal without a good wine. As mentioned before, its fertile land is producing better wines every year and Murcia is becoming a strong competitor in this market. 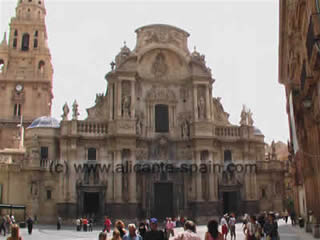 From a tourist point of view, Spain and Murcia itself offer you a huge amount of interesting places to visit as the history of the city goes back to the years 800 where it was originally founded as part of Cordoba. Certainly amongst the famous visiting points for any traveler is the Cathedral de Santa Maria. Finished in the 15th century the cathedral is the most impressive monument of Murcia. The city is divided by the Segura River and is known for its beautiful Baroque Cathedral, Almudi Palace and the castle of Monteagudo ( where the Arab influence can be well appreciated ), a fortress from the 11th c., the Market de Veronicas, the Malecon Garden, the University of Murcia and the Museum Ramon Gaya. The Museum Ramon Gaya, dedicated to the artist with this same name and native of Murcia, is found in Casa Palarea in the Catalina Square. It was inaugurated in 1990 when the artist was 82 years old and also includes other works of art from other artists. Ramon Gaya was influenced by famous artists such as Vazquez and Rembrandt, so you have an idea of the intense precision of his work. 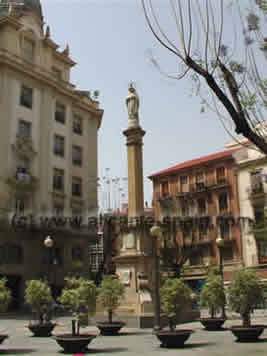 If you ever come to Murcia, please spend some time and discover the beauties of this fantastic building. The cathedral which is located at the plaza del Cardinal Belluga, got different entrance doors. All of them on their own a treasure. The main entrance, called puerta del perdon, the north door, portada de las cadenas and the portada de los apostoles lead you into the impressive capilla mayor decorated with lots of gold. When you took your tour around the cathedral of Murcia, make sure you visit the museum inside the cathedral, where many more details are explained.

Right outside the Cathedral you will find the city hall and the Palacia Episcopal, the residency of the Bishop of Murcia. When I first visited the city I was overwhelmed by the amount of nice places along the streets. The variety of museums, from the archeological to the museum for water systems, to the museo de bellas Artes which shows art from Ballester and Gaya amongst others.

When visiting the Murcia region, I would recommend a visit to the capital of the region, Cartagena and Caravaca de la Cruz. 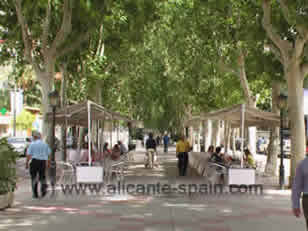 Furthermore you should consider having a stop at the many bars and restaurants around the city, especially in summer when Murcia weather conditions can be demanding to any tourist. In case you look for a golf course or Murcia golf club around, please look at our golf course list here.

And to be well rested during your stay in Murcia, I personally would recommend the Hotel Nelva, which is located near the historic centre and was built in 2005 and has all the services available for a casual visit or for business. To arrive there with no problem when coming from Madrid on the N-301 or from Alicante and the Costa Blanca area, take the exit marked “ Avenida Juan de Borbon / Ronda Levante”. Go along this Avenue for about 4 kilometres and turn left when you see the sign for Ronda Levante and about 500 metres ahead is the hotel and a good start for your Murcia tour.

Tips on your next Murcia trip

If you plan to spend your holidays in or around Murcia, make sure you rent a car. Local transport by bus or train is available, but if you want to see something of the beautiful places around the Costa Blanca and Spain you really want to have a car. Murcia car hire companies offer car pick up and drop at Murcia airport which you would like to have. It is not advisable to come to Murcia during the summer period, without a car reservation in hand.