Cordoba Spain, emblem of the tolerance and comprehension for many centuries among three religions (Jewish, Christian and Muslim ) offers unlimited surprises ranging from an intense past history to an incredibly artistic entertainment never seen anywhere else before.

Cordoba, one of the eight provinces, situated in the Autonomous Community of Andalucia, was built on the shores of the River Guadalquivir, flowing from east to west. Its location in a fertile Cordoba region leads to mainly cultivating olive tress – owing to its rich olive oil, vineyards – delicious wines of all kinds and cereals.

In order to fully understand and enjoy your visit to Cordoba, it´s absolutely necessary to talk about its origins. Starting with the Romans in 152, it was later conquered by the Emirate of Al-Andalus who reigned there from 711 to 1256 under the dynasty of Omeya. During this time, Cordoba was very prosperous culturally, economically, grew in population and what we can still appreciate today, in its art. Nowadays, Cordoba is an energetic, up-dated city with modern streets and a large active population. But within all this modernization, Cordoba like Seville is a living symbol of its splendid Arab culture, architecture and art. 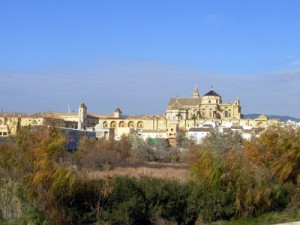 Architectural and Cultural visits to the City

The historic centre of Cordoba is relatively small and should be visited on foot. The main entrance is usually done through the Tower of Calahorra, a fortification from the 14th century, built to protect the Roman bridge. From here we have an amazing view of the Mezquita-Cathedral, the most symbolic and magnificent highlight of Cordoba. The Mezquita was built in 780, later enlarged, to show off its wide, spacious patios surrounded by over 840 impressive red and white columns. Observe the Mihrab ( praying niche which indicates the direction of the Meca) which is usually situated at the head of the mezquita. Its striking, sumptuous dome is very ornately decorated.

The Cathedral, which was constructed in the centre of the Mezquita, was done in Plateresque style ( ornate Spanish architecture from the 16th c.). By putting the

Cathedral in the middle, some columns were destroyed and replaced by vaults and archs, therefore changing the aspect and spirit of the Mezquita. Our next stop has to be a tour of the Jewish Quarters, strolling through the white-washed walls of the narrow streets with their colourful variety of flowers hanging from the walls and balconies. Here, we can also view one of the three existing medieval sinagogues still in Spain. Near

here is the Zoco, a type of street market, with unusual shops and shopkeepers. From this area we continue on to the River Guadalquivir to see the Alcázar ( 14th c.), a palace constructed by the Christians with beautifully decorated Arab gardens. It was used for the Spanish Inquisition for three centuries. In the Plaza de Potro we can still see the inn where Cervantes was inspired to write “El Quijote”. In this same square (plaza), we can find the Fine Arts Museum. If you are interested in Roman archaeological findings and decorative Arab art, you should visit the Provincial Archaeological Museum located in the Palace of Páez. 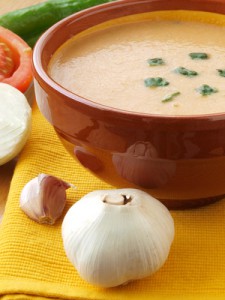 Needing to ´fuel-up´, let´s take a break and try some typical nutritious gazpacho (cold soup made with tomatoes, garlic, vinegar, water and salt all made puree and topped with chopped hard-boiled egg and croutons) and some refreshing ´fino´ (sweet wine). In the Jewish Quarters and in the Plaza de Potro, you will find typical taverns which offer a large range of fried fish and seafood rice served with abundant broth. If meat is your preference, a good broiled or grilled steak is offered daily. There are delicious sweet pastries usually made in the nearby monasteries or convents, the most popular one being a ´ heavenly delight´ (tocino de cielo) made basically from egg yokes.

Taking advantage of the surrounding mountains, you can go hiking in the Natural Park of the Subbetica mountain range or in the Hornachuelos mountain range. While in the Subbetica mountain range, you should visit the town of Zuheros located on the cliff of the mountain. Where you would normally have to climb up the mountain to see a castle, in this picturesque village with villas you have to climb down. There are also pleasant quaint rural accomodations being offered there. The Festival of Flamenco of Cordoba is celebrated every three years ( year 2004) with reputable, known guitarists and new talents to be discovered. There are also bullfighting festivals during the year, especially in warmer months. During Easter week we can join in on one of the most spectacular religious processions ever seen. At the end of the week, a prisoner is pardoned and participates in the procession. In the nearby town of Baena, there are 48 hours of non-stop drum playing in honor of this religious feast. 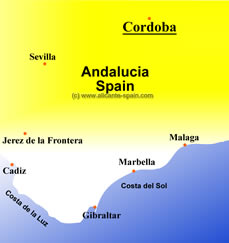 Nightlife is a must to get in contact with the local people to feel their magical charm and wit. By either walking through the enchanting streets and stopping to try ´tapas´ ( a variety of dishes in small portions) or trying out the discotheques, you will be able to appreciate these special people´s spirit for life. Buying handicrafts in Cordoba is like buying live history. Perfectly embossed leather and engraved arabesque designs on metal are the most interesting souvenirs.

Visiting nearby towns or major cities like Granada can be very relaxing, helping us to escape from the busy city. Andujar, to the east of Cordoba, has an in-numerous amount of churches and little palaces. In one of them you can see a painting by El Greco. The spellbinding sights are worth the trip. Lodging can be easily found in Cordoba, be it a centrally located posh hotel, a smaller boarding house or family owned rural housing. Just keep in mind to book in advance if possible. In Cordoba, you will experience endless feelings of admiration and awe as you are engulfed in its Arab history and culture, still living today among the Spanish.