Seville, symbol of Spain by public opinion, is the capital of Andalucia. Opening up before our eyes is the height of the Arab culture in all its splendor. One surprise after another is manifested as we parade around the enchanting narrow streets of Seville.

There is so much to see, learn, feel and experience that we are obliged to dedicate a few days to visit this ideal city. Following along the same line as all the other areas of Andalucia, Seville is no exeption to the Arab occupation and domain from which seville aquired its flourishing architecture and personality. Adding to this, the benefits that Seville reaped from the riches received from the New World, the Americas, Seville was converted into a very prosperous city for two decades. 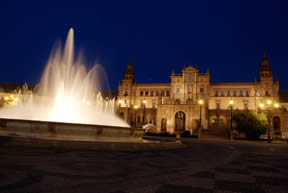 In 1248 Seville was reconquered by the Catholic Kings and there is so much evidence of all its history up to present.

Seville, joined with Granada and Cordoba, has the most outstanding monuments in all of Andalucia. The Cathedral and the Giralda are the major attractions and most symbolic for Seville in the world. The Cathedral, belonging to the Gothic style, being the largest of all its class of all Christianism, dates back to the 15th c 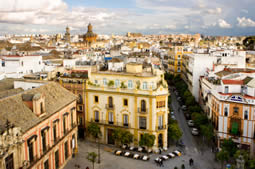 entury. It was built over the then existing Mosque temple where there are still structures remaining. The High Altar has an enormous precious altar slab where Christs life is intrincately depicted, the Royal Chapel 16th century, carefully guards the urn of the incorrupt body of King Fernando, conquerer of Seville. There are many smaller chapels within to be visited; Christopher Columbus mausoleum is on one of the side wings. 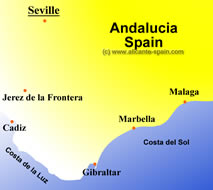 Masterpieces of such known Spanish painters like Murillo and Zurbaran are on display. Right near the Cathedrals main doorway, in the Plaza de la Virgen de los Reyes The Virgen of the Kings Square, we can lay our eyes on the Giralda. The Giralda is a magestic tower, the old steeple or spire of the Mosque temple in Roman-Greek style. Through an easy access, we ascend the 70 metres to reach the highest point where an astonishing overall viewcan be captured.

The Porch of the Oranges (Patio de los Naranjos) has also been kept up very well. Just a few meteres from there, we have the Archives of the India, composition of Juan de Herrera, where we can contemplate almost 35,000 of the manuscripts of Christopher Columbus, Magallanes and Hernan Cortes. The Royal Castle (Reales Alcazares), a beauty of the Mudejar Art, was constructed thanks to muslim craftsmen in 1362 by King Peter I Cruel Peter The Porch of the Maidens and the respectable Embassy Chamber room with its remarkable gardens must be seen. As you leave, we pass through an archway into the Medieval Jewish neighbourhood: an authentic complex of narrow white-washed streets. Now it is time for a little shade and fresh green vegetation, so we are off to Maria Luisa Park Water fountains, ponds and many statues dedicated to historic people from all aspects of life are honoured here. The Plaza de España, found within the park, is an elegant semi-circular “Square” paying tribute to all of the Spanish provinces with its 58 tiled benches representing each one. 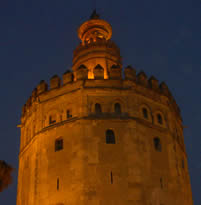 Staying along the the River Guadalquivir we come across the Tower of Gold, a fortification for Sevilles defense back in the Arab occupation. The Bullring (Plaza de Toros) called La Maestranza, built in 1760 is adorned with the typical colours of Seville: white with the wavy edge trim. On the other river bank is the ever so popular neighbourhood of Triana, very folklore in its flameco tradition and religious dedication to the Virgen with the same name. Within this same area is the Cartuja, world-wide known factory and showroom with its production of ceramic chinaware and other pieces. In the Sierpes Street, we find the ourselves in the centre of Seville, the most commercial part containing anything from the most chic, exquisite, fashionable boutiques to the latest craze around. The Fine Arts Museum, housed in an old convent, has collectibles from Murillo and Zurbaran. Lets just stroll around and randomly sightsee. We should encounter the Basilica of the Macarena (one of the mostpopular Virgens honoured in Seville) – we all remember her famous song!

You would not be in Andalucia if you could not take a break and just relax in one of the shady Squares of Seville and savour some of the Tapas or delicious light snacks that all bars, cafes and restaurants have to offer. Where should we stop to have a bite, someone might ask. And I would truly recommend that they just follow the locals, they really know! A fine glass of wine and any of the tapas that are written on the blackboard outside all shops. You might be able to try fish sticks, veal, tripe and duck chine butter. The best and most entertaining part of this way of eating is that you never get bored. The real way to do it is to go from one cafe or bar to another, as if you were a food expert, relishing the home-made appetizers. Before you know it, you have had a full course meal! And now for the dessert – angel hair turnovers and afajores.

Whether you like music, dancing, theatre, folklore or just letting your hair down, Seville has it all. During the day, with the younger ones, you can enjoy one of Spains newest Theme parks installed in what used to be the Discovery Park, the pavillions are now the new theme park. Later at night, for the older crowd, you can find the finest pubs to just let your spirits free, local theatre productions, music bars where jazz is played or Tablao Flamenco”- very well staged Flamenco dance with their colourful flowing dresses- where you can really see the authentic inner spirit of the Andalucian people. For seasonal festivities Seville offers the devotional and highly ritual Easter week processions, unique in all the world! It is joined with the fabulous Spring Fair which orginated in 1847 and is held two weeks after Easter week. It is the other face of the Easter week ritual with an intense merriment in all the main streets. Can you imagine the streets of your home town lined with stands, booths and canvas tents or pavillions, dancing and music 24 hours non-stop for a week? Here in Seville the fairgrounds are always open. In June we haveanother religious festivity called Corpus Christi.

On the move around Seville

To the east of Seville there is a walled in roman town called Carmona, dug into the rock of the mountain, dominating the Guadalquivir River valley. Carmona is one of these quaint towns where you can have a tranquil romantic evening while taking in living history. You can stay at one of the national Parador hotels, the Palace of King Peter I or any of the hotels there all magical! Then to Marchena, with prehistoric findings and good wicker and rattan crafts. On to Osuna, where one of the most prestigious noble families still have their luxurious residence along with many little palaces and the old university. Italica lies just a few kilomtetres outside of Seville where old Roman remains can be discovered along with mosaics and one of the oldestRoman Amphitheatres. Seville is a living natural stage, always ready toput on a good performance for you!