The british colony of Gibraltar marks one of the widly known reference points along the Costa del Sol. Small but intense is how Gibraltar could very well be defined.

It was once called “Calpe” which means empty or hollow referring to the huge rocky form later tunneled out in the 18th c. Many people say that its name actually came from a bad pronunciation of the Arab words yabal Tariq- Tariq´s mountain, once invaded by Tariq b Ziyad, as much of Andalucia was. Its strategic location just south east of Cadiz, in the Strait of Gibraltar, has been the key of envy and in-numerous battles, but always coming out victorious and strong as it is nowadays. 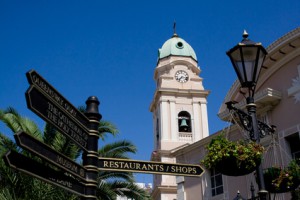 Gibraltar and How it All Came About

Once a Phoenician ( 950 b.c.) possession, then a Carthaginian and Roman colony, Gibraltar, in 711 a.d. , was soon under the Berber domain, one of the most important Muslim tribes. In 1160, the Caliph of Morocco had a city built in Gibraltar and as its principal focus, the castle in Grand Casemates Square; thus starting its beginning. In 1457 it was reconquered by the Christians, but was always under attack, now between the Borbon Monarchy ( backed by the French) and Charles of Austria (antimonarchical), backed by the English.

At the end of the War of Succession between these two in 1713, after signing the Peace Treaty of Utrecht, Spain had to yield Gibraltar to England. Spain´s last armed intent to get Gibraltar back was in 1779 during the Great Siege, but once again Spain had failed. Finally, in 1783 the peace treaty of Versalles was signed putting an end to all the bloody fighting. In 1830 Gibraltar was given the name of “ The Colony of the Crown ”, with independent executive and legislative powers. Germany´s increasing power made Gibraltar build up its naval port which later came in handy during the two World Wars. During the Great Siege, many tunnels were built making Gibraltar self-sufficient. In 1963 it got more internal political freedom and Spain closed its borders in revenge. Up to date, there are still negotiations going on for Spain to lord once again over Gibraltar. 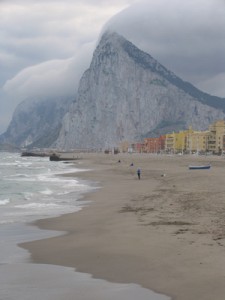 When seeing Gibraltar, whether from land, sea or air, we are taken aback by its majestic impact; a rock filled with holes, like Swiss cheese. Being that the Moors dominated this place longer than any other civilization, it is logical that they have left more of their culture here than anyone else. As we pass the entrance gate, opened anew by the Spanish government in 1985, we can see a beautiful sandy beach and a lovely view of the Catalan Bay, used by settlers in the 18th c. and a hideout for others who were forced to leave Spain during other discrepancies. The eastern face of the limestone rock seems to impress all with its dramatic cliffs, basically made of hard crusted sea shells from millions of years ago. At the tip of the peninsula is the Lighthouse, marking clearly the Strait of Gibraltar with its 50 meters height and over 18 miles of visibility. As we head up the top, magnificent views of the mountains of Morocco come into sight. To one side we have the extensive Atlantic Ocean and to the other the deep blue Mediterranean Sea, two very distinct bodies of water. As mentioned before, Gibraltar has many “holes”, actually natural caves, the most famous one being Saint Michael´s Cave, used as a concert hall nowadays. 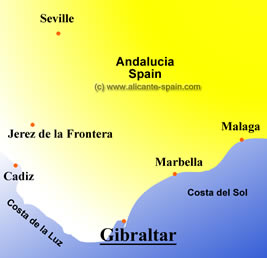 Over 135 caves have been found, all which seemed to have served as shelters or hiding places many millions of years ago. At this point we can also see O´Hara´s Battery where one of the big guns used to defend this point is still kept. Something not to be missed is a visit to the Apes´ natural habitat at the top of the summit. These primates have lived here for over two hundred years and seem to be the real owners of Gibraltar! A visit to the unlimited tunnels excavated in the 18th c. is a very interesting treat. There are still graffitis written on the walls, thought to have been done by the guards during their vigilance so as not to fall asleep. But without a doubt, the Moorish castle is the highlight of Gibraltar. This 14th c. Tower of Homage, highest point of the castle complex can be observed to the eastern side but the original castle was to have been built in the 12th c. It was from this point that the Iberian was overtaken by the Arabs and the first Moorish building to have been made in Europe. Many of the walls which once surrounded this castle still remain and they are doing everything can to keep them in good condition so that we can appreciate the wonderful Islamic culture. 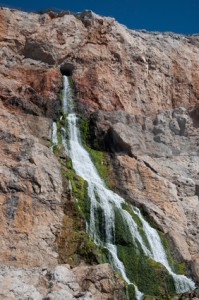 The Alameda Botanical Gardens are a delight to visit. These gardens date back to around 1816 when the main “promenade” was made around the castle giving a place dedicated to open fresh air activity much needed back then. Being as there was not much land available, these gardens were made in a terraced way with intricate connecting pathways using up some of the land used for growing vegetables and burial grounds. There are some archways made from whale bones supposedly from Jurassic periods and the variety of flora is either native grown or imported from the countries which had maritime connections with this so important port. Many adorable sections are done by different countries leaving their cultural touch and honouring their heroes. A multi-purpose Open Air Theatre is always in use for very different types of performances such as concerts or beauty contests. All the plant life is naturally taken care of and always respectful of our environment and enjoying the great Gibraltar weather. Water sport activities such as skiing, scuba diving, jet skiing, boat excursions or wild dolphin watching is at its best.

TIME OUT FOR A MORSEL

As all good port cities, delicious seafood in all its variations can be found. But as something special, the people from Gibraltar make an indescribable spinach omelette or some fried quiche made from chick pea flour, sometimes with a touch of lemon juice or maybe just adding some cut up parsley or onions. All sorts of wines are very refreshing at any time.

Who would have ever thought that a “ rock “ could tell us so much-just listen to Gibraltar!