San Juan, located about 8 kilometers north of Alicante, is actually divided in two parts: the pleasant sandy beaches which run into Campello and the rural town two kilometers inland. 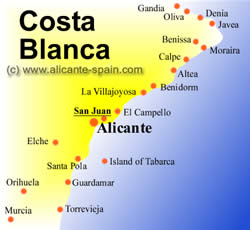 All along the beaches of San Juan and Alicante you can find comfortable hammocks and sun umbrellas to rent and some of the best restaurants where you have a typical Spanish breakfast of sugar covered buns, good strong coffee and freshly squeezed orange juice. At mid-morning you can have a snack which would include a nice Spanish beer or a glass of wine with maybe some octopus or cold vegetable salad to hold you over. After soaking up the sun, even in winter months, a nice paella on the terrace overlooking the sea is what best characterizes San Juan. In the town, there are nice shops to visit and a typical Saturday street market with all kinds of goods, especially fresh products.

If you have already seen Alicante city and are looking for some small town activity, then I would recommend the following itinerary:

Muchamiel ( Mutxamel) – Continuing on inland after passing through San Juan you come to the Arab town of Muchamiel with the best tomatoes in the world. Later the landscape changes into almond trees as you are getting closer to Jijona, world-wide known for its large variety of nougat candy. For golf lovers, the Bonalba Golf Club is a nice way to spend a day.

Aguas de Bosot – Back to the N-332 and heading north, take the deviation A-183 to the Caves of Canalobre. These caves were discovered in the 11th century by the Muslims. During the Civil War, these caves were used as repair shops for Soviet aero planes. Now they are open to the public for visiting with concerts but there are restricted areas so that the speleologists can continue their investigation. There are curative waters (38 degrees) which have shown to alleviate stomach, urinary, anemia and arthritis problems. 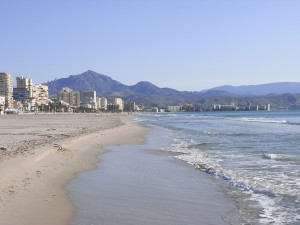 Campello – Just north next to the beach of San Juan you will find the city of el Campello. With its sandy beaches and very very nice restaurants along the sea line. A must also for train travelers who take the little narrow gauge railway along the Costa Blanca, which starts in Campello.

Villajoyosa – A little further north on the N-332, you can start to smell the distinctive aroma of chocolate. The fame came to this humble town when it started to import from Ecuador and Venezuela this delicious plant in the 18th century. Nowadays, you can taste all kinds of varieties in the shops called Valor which produce and commercialize chocolate all over Spain. The old part of this town is called the Arsenal and is situated on the shore. It is well wroth taking a stroll around the narrow streets with lively colored houses built on the flank or side of the river bank. Although many may think this to be dangerous, the reason behind this was so that the fishermen could see the sea from their homes. And for those who wish to try luck and have not had the opportunity to bet and gamble at a real casino, visit the Royal Palm Casino there. The festivities called ‘Moors and Christians’ is lived to the maxi there. From July 24th until the 30th, there are parades with impressive costumes and accompanying music. There is also a real live re-enactment of the landing of the Moorish Army on the beaches at dawn on the 28th with rustic weapons being used until, when the night falls, and the Arab leader and his army are thrown into the sea, being defeated. If you want to stay awake this night then ‘do as the Romans do’ and try the famous drink called ‘nardo’ made from coffee and absinthe.

Benidorm – this is a must for those wanting to live the days on the beach and the nights in the streets. There are so many kinds of night life activity until real late at night. The Bali Hotel is the tallest hotel in Europe and offers all kinds of luxuries along with the theme park called Terra Mitica which offers all kinds of emotions.

Whether you stay put in San Juan or travel up and down the Costa Blanca, sun, fun and good food will always be at your finger tips.