First of all please allow me to to clarify a couple of things regarding the Alicante Tram train:

You can use the narrow gauge railway to Benidorm and Denia also for your trip to Altea, Calpe and Teulada.

Where to get on the Tram train

The easiest way is to take the Tram at the FGV Tram streetcar station at Plaza Puerta del Mar, located in the beautiful harbor area of Alicante. From the airport in Alicante you can easily and directly go there using the C6 Alicante airport bus.

At the end of the bus ride (after about 45 minutes) is the bus stop Puerta de Mar.

It is the last bus stop – the bus driver will wake you up anyway if you fall asleep as I usually do on those kind of buses. 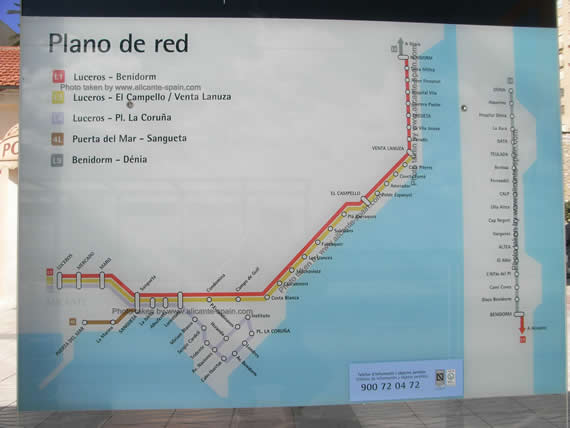 As you can see on the detailed route map to Denia Benidorm and Calpe (just click on the map) , the Tram stops in many cities, town and villages along the coastline.

Well it is up to you to decide. Here are a couple examples to give you a “Alicante to Denia Calpe Benidorm Train Travel Time Idea” how long the Tram trip might take you:

The train stops at the following towns/villages on its way to Denia:

This leads to the following ticket pricing to Benidorm or Denia:

First you might need a Tram Ticket for Zone A downtown Alicante, which is EUR 1,15 . In addition you will need an FGV train ticket, depending which zone are you going.

Timetable Alicante to Benidorm and Denia

Timetable Denia and Benidorm to Alicante

Getting To Benidorm or other cities around the Costa Blanca by TRAM, is a wonderful way to enjoy the beautiful landscape along the coast. Since the train stops at very many towns and cities on its way north, travelling by TRAM takes its time. For a simple “airport to hotel” transfer, I would advice against it and instead use direct bus services from Alicante airport where possible.